There is an inner landscape that we project outward in every moment. There is an exterior world that forges our soul with every stimulus emitted. It is a flow of tides, an osmosis. It is difficult to establish the boundary, the line that marks the separation between outside and in, interior and exterior, me and the world. 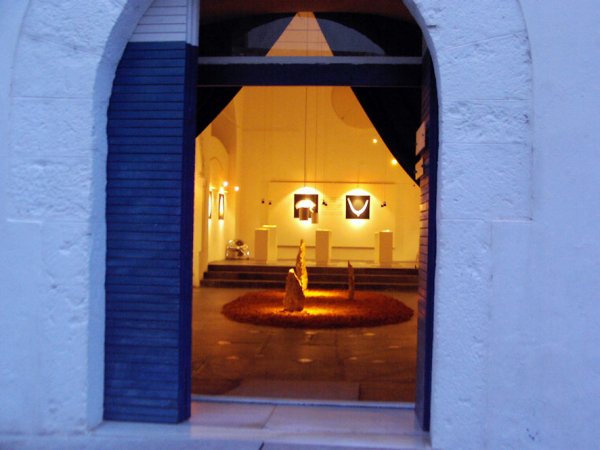 These works are a personal investigation of the margin between consciousness-material, nature-culture, subject-object, private-universal, through an intimate sort of poetics.
I believe that everyone has in his home some sort of curious object found on the beach, or on a mountain walk. Things, sometimes special but sometimes ordinary, that have interest and appeal only for he it was who found them. They are reflections, correspondence, relationships, dialogs between our psyche and the world through fetishistic objects, vehicles and reminders of data packets. Elements that trigger mental associations, thoughts, images, emotions that are subtile and not easy to describe.

Why the walks and the objects? Why do they hold so much importance, why so universal? There is something ancestral, that sends us toward the origin of the human being in his exploration of the world. I believe that human consciousness is born in this way: as a universe to explore, an unknown void that must be traversed, recognized, remembered, as full of perils and resources as the wild world outside. To be conscious is to live this territory like a creative space of relationships and possibilities, it is opening the door to our psyche in order to uncover an infinite and abysmal world, an immense void within ourselves which, with great bravery, we dare to explore. Marking sites, leaving signs, interpreting phenomena of an unknown and fascinating territory that begins just behind our eyeballs.

EXPERIMENTAL MORPHOLOGY: A study of forms founded on experiences, and on the conscious memory of that which has been lived. Through the practice of walking and of data collection. What results is a hygienic and liberating praxis, an intimate subversive act of emancipation. The intent to flee from the dictatorship of speed and vehicular structure. Collecting, recording, storing information: source-data.

FROM AN INFINITE ISLAND: Research has set boundaries for itself in an easily-defined and coherent microcosm in which a downward/inward projection uncovers a universe above/outside. All of this speaking in terms that are physical, metaphysical, religious and psychological. A space that is multiplied within itself like an immense conch shell whose exterior limits are evident and whose interior spaces are of an unsuspected complexity.

It is an experience May you find it beneficial.